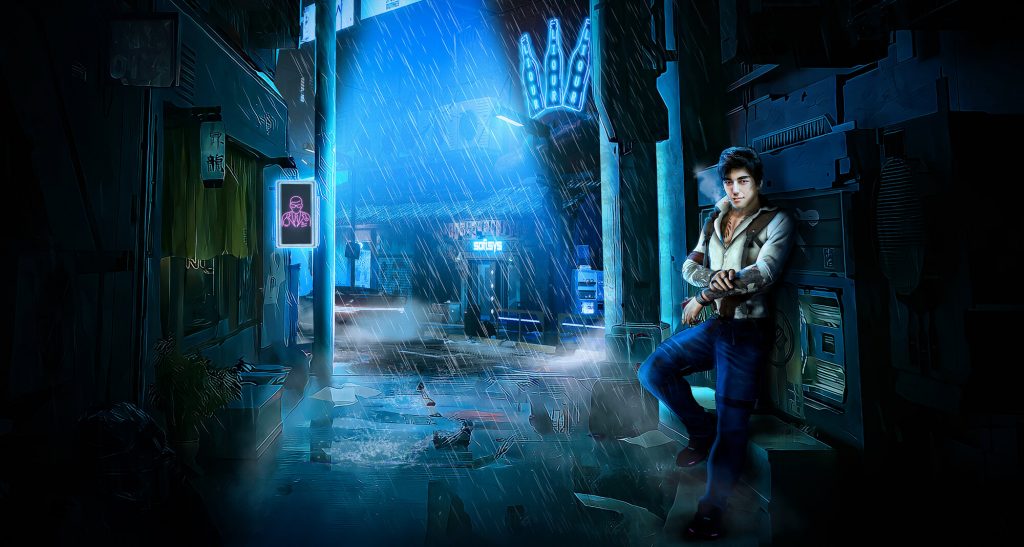 I woke up with excruciating pain in my back. I was lying flat on my stomach on a tatami mat, wearing nothing but a traditional fundoshi. It took me a while to adjust to my new surroundings. Thin pieces of bamboo were scattered on the floor all around me. On my left were low cabinets filled with books on the subject of irezumi. The empty spaces in the cupboards were filled with small statues of Buddha. An old man was sitting on his knees next to me on my right. He was holding a sharp bamboo stick in his hand, called a nomi. A nomi is a thin piece of bamboo with needles attached to it. Up to twenty needles could be assembled on the nomi. And silk string is what holds everything together.

“Genki desu,” I told him as if it all came naturally to me.

It was as if the Japanese language suddenly was my native language. I could read everything that was written on the cover of his books. It didn’t take long before the old man started poking the nomi back into my skin. I woke up in the middle of a tebori session. Not the first impression I had in mind. One minute in this world and I’m already in pain. But I let him continue. Back home I always had the idea of getting a small tattoo in the traditional Japanese way.  But I didn’t expect to get a full back piece the minute I arrived here.

About twenty minutes in, I was making a fist with the palms of my hand and biting the lower part of my lip. I would grab anything that was lying close to me. Just to forget the unbearable pain of those needles penetrating every inch of my skin. Small drops of sweat were coming out of every pore that didn’t have ink in it yet. The old man seemed to know I was having a rough time. I wasn’t exactly hiding my pain from him. But there was nothing he, nor I, could do about it. It was a rite of passage I needed to get through. At least that is what he told me right before he started poking me again. If it didn’t hurt, anyone would go through it and it would prove nothing to the oyabun. It would lose all its meaning.

After our session was finally done, I had a long look in the mirror. I was curious about what my avatar would look like. I wondered if I was going to look exactly the same as I did in the real world. Maybe with some typical Japanese features so I looked less like a gaijin, so I could blend right in.

The first thing I noticed was my fully tattooed upper body. I was rocking a full bodysuit. So I was surprised my avatar wasn’t used to this pain by now. I admired every part of it. It might have seemed weird to the old man, but I asked him about the meaning of each part. He then explained them to me one by one.

On the right side of my chest was a Buddha surrounded by lotus flowers. The Buddha symbolised a strong religious belief in the spiritual way of life. While the lotus flowers symbolised life in general. The struggle to make it in this life. My right arm had a koi fish swimming upstream, meaning I was battling a hard time. Apparently, these were one of the most common tattoos in Japan.  They represented courage and determination. Legend has it that when a koi fish succeeds in swimming up a waterfall, it would turn into a dragon. The ultimate image of power and strength. The peony flower at the bottom of my arm stood for risk-taking. And for a daring attitude, like the samurai used to have.

A giant snake covered my left chest. This symbolised wisdom, knowledge, and life. And also rejuvenation due to the shedding of their skin. My left arm had a foo dog, which supposedly would have powerful mythic, protective powers. So its meaning was to guard and protect me from everything bad coming my way. The lower part of my arm had a Chrysanthemum flower, which represented longevity and perfection. In between, several maple leaves were filling up space. These symbolised love, peace, and harmony.

They say you can know a lot about a man by his tattoos. Based on all these, I could make a sketch of what my avatar was like: a smart man who loved life in general. But who had a hard time making it to where he was now. He was a deep, religious man, trying to climb up in the world. All the while he was protecting the ones he cared about. Everything he did had to be perfect.

I was admiring the rest of my looks, including my thick black hair that seemed to come straight out of a manga comic. Then I noticed I was missing a part of my little finger. Before I could even take a look at it more closely, the old man returned with a large mirror. He wanted to show me the work he did on my back. His work dug deep into my skin, revealing a samurai fighting a tiger. He explained to me that the tiger stood for courage and power. They were wild and powerful, not meant to be held in a cage. I felt a strong connection with the samurai, or at least my avatar did. He was considered to be a warrior, fearless, strong, and disciplined to the extreme. The samurai was even ready to give his life for his family, or the Japanese culture, at any time. It meant my avatar was willing to fight for what he believed in. By now, no flesh below the neck was left untouched by needles. Except for a space that ran between my chest, all the way down the center of my body.

I thanked the old man, while I was admiring the piece of art he did on my body. I started looking for some clothes to put on. There was a three-piece suit lying next to the pile of books, neatly folded, almost to perfection. I grabbed my shirt, a double-cuffed white one from Dolce&Gabbana. As I put on my jacket, I noticed the name DIOR sewn into the lining of my suit.

At least he’s got good taste, I thought to myself.

The cuffs of my shirt cuff were visible underneath my jacket, for about one inch. It revealed my custom-made cufflinks with the initials TJ on them. This was the first clue I had in finding out my identity. For now, I still had no idea what my name was, except for those initials. The only thing I was pretty sure about, was that I had to be yakuza. Given the fact I was fully covered in irezumi, and the fact I was missing a part of my finger.

I left the two top buttons of my shirt open, revealing a small part of my chest tattoo. The moment I put on my suit and took another long look in the mirror, I noticed most of my tattoos weren’t visible anymore. If I closed every button on my shirt, people wouldn’t even know I had them. I looked like a decent guy, a regular company man who wouldn’t raise any suspicion about himself. Someone who had nothing more to hide from the outside world.

The suit I had on was black, sharp-looking, and definitely well-fitted. Exactly the sort of thing a man of this caliber would wear. Most people wore blue suits, but my avatar refused to look like everyone else. His aim was to stand out from the crowd. I had a feeling his suits had to look good for a man of his posture and occupation. So these were the finest suits you could buy this side of town. They were tailor-made and flawless. I tried searching my pockets for a wallet.  Tapping each and every one of them until I felt the silhouette of one in my right breast pocket. Reaching down, I felt a slight touch of leather. This was definitely a wallet. As I opened it, a photograph tumbled down, landing face up on the ground. I found myself looking directly into the face of a young woman. But I had no idea who she was, or what that photograph was doing inside my wallet. I picked it up and put it back in my wallet.

I’ll figure it out later, I thought to myself.

In the other breast pocket was a silver flask with a small caliber bullet stuck in it. I opened the cap and the smell of whiskey filled my nostrils. There is always a time and place for a sip of whiskey. I was glad my avatar thought the same. For now, I was trying to find out who I was. So I kept going through the wallet looking for some kind of ID. It didn’t take long before I found one, hidden in one of the back pockets. The face on the ID looked exactly like the image I saw in the mirror earlier. The name printed on it was: Takayama, Jiro.