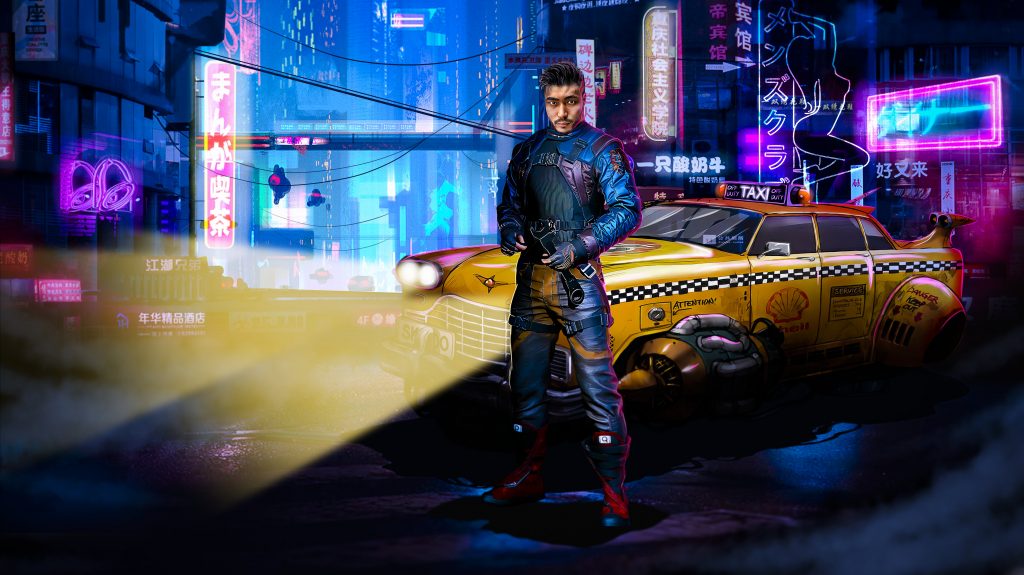 The name Tanabe was displayed in the plastic pouch behind the passenger seat. He was driving up and down Greater Tokyo, looking for a new customer to pick up. The weather had cleared up to bright, blue skies, so business was kind of slow. People wanted to walk when it wasn’t raining, and those days were rare in this city. It was as if even crime took a day off when it stopped raining.

Tanabe was driving to the tunes of his radio, tapping his fingers to the beat. If there weren’t any customers around, his taxi was filled with his favourite music. Not a lot of people could appreciate his taste in music. At least not the clientele he was hoping to pick up. He was always on the lookout for rich people because they usually tipped big. But they wouldn’t leave big tips if they had to listen to metal music the entire ride.

On the side of the road, a man pulled out his arm and yelled for a cab. Tanabe wasn’t the only one on the lookout. Several other drivers had the same desire to pick that man up. This was survival of the fittest at its best. Luckily for Tanabe, his driving skills were developed a lot more than the regular cab driver. Before he landed this job, his ultimate dream was to become a race pilot in Tokyo’s biggest underground competition. Driving between skyscrapers in the dead of night and leaving your competitors in your rearview mirror was all he ever dreamt of.

He didn’t want to lose this customer. This would mean he could provide food on the table for him and his family tonight. Tanabe quickly accelerated and swirled through oncoming traffic, just to be the first one there. It wasn’t what he dreamt of, but it was definitely a competition all right. The man startled and jumped up when Tanabe came sliding in, opening the door from the inside as soon as he came to a stop. The man scanned the area, looking to see if this was the only cab he could take. For some reason, he didn’t feel safe getting in Tanabe’s cab. Most of the other drives already accepted their loss and kept driving away from the scene. He glanced inside Tanabe’s car and jumped right in.

“Ueno Station, onegaishimasuI,” he said politely, “and thanks for picking me up by the way.”

Tanabe was glad he could feed his family tonight, even if it meant risking his life from time to time. Rush hour was making its way into traffic, causing the road to get overrun with people trying to get home. These days, traffic was already bad in the big city, but during rush hour it was madness. It was best to stay indoors and wait until it passed.

“Going to a gala or something? I don’t get many people dressed like that in my cab.”

Tanabe pointed out the expensive tuxedo the man was wearing. Tanabe couldn’t even afford a second-hand tuxedo. Not with the salary he was making driving people around. Not that he needed a tuxedo, but it would be nice to have that option when it came to that.

“The company is having a fundraiser and they asked to host the night. Why wouldn’t they? It’s my project they need the money for,” he laughed.

“Really? What kind of project if you don’t mind me asking?”

Tanabe was always interested in the stories of his customers. He learned something new every day. By doing so, he knew where he could find the right people to pick up after a while.

“We’re holding a silent auction to raise money to improve the living standards of drug addicts. Everyone in the company was asked to bring in some rare or old item which they could sell. Once we raised enough money, we should be able to buy a new building to house drug addicts who are trying to get better. With that new drug EPC in town, more and more people are losing their jobs and houses, just to pay The Doctor.”

“I heard about that so-called Doctor, nobody knows where he came from. One day he just started pushing his product to everyone who wanted to escape their everyday lives. Driving my taxi around the city, I’ve seen my share of addicts. Especially around Shibuya these days.”

“And that’s exactly what we’re trying to fight. Get those people back on their feet.”

Tanabe always tried to strike a conversation with his customers, making their ride as comfortable as possible. Most people would keep to themselves, they felt better than to talk to a mere cab driver. They wouldn’t even answer the questions Tanabe asked them. A little courtesy never killed anyone you know, but they rather stayed in their own little privileged world.

“What about you? Did you achieve everything you wanted?”

The man was clearly interested in getting to know his driver.

“Would I be driving a taxi if I did? I can’t say I’m unhappy with my situation, but this isn’t how I planned my life to turn out.”

Tanabe saw the man nodding in his rearview mirror. It’s been a while since he last had a customer who was that interested in small talk.

“Well, do you remember the riots in Odaiba back in 2090?” Tanabe continued.

“Of course, were you there?”

“I was. I used to be in the military, under contract by the city to protect the police force during the riots. They were enormously undermanned and they could use our troops and equipment. We didn’t really know what we were getting ourselves into. No one could predict it would take such proportions. Even with our help, the NCPD was still no match for the people of Odaiba.”

The man was listening to every word Tanabe said, his mouth open in shock.

“I was with my squad inside a grocery store, trying to keep it safe from the looters. We didn’t know we walked right into an ambush. While protecting the owner of the store from getting beaten to death, we were too busy to notice he was actually on their side. We were pelted down with rocks that the people outside were throwing at us. Then the owner took out a shotgun and mowed us down one by one.”

“I lost three of my men that day, only two survived, including me. We only survived by playing dead. If we hadn’t, they would have dragged us outside like they did with the rest of my squad. They beat them to death in public. It was horrible. After that day, I promised my family I wouldn’t put myself in that kind of danger ever again. Yet here I am, driving a taxi in a city that’s gone to hell.”

“I can imagine. Being a cab driver these days isn’t for the weak-hearted, but it still beats serving in the military I guess.”

“I know. It was actually my wife’s uncle who got me this job, so I couldn’t really say no to him. We needed the money, and he was family you know. Besides, the military didn’t exactly compensate us for our service during the riots. Besides a couple of scars, we got nothing. Just a thank you and goodbye.”

“But hey, at least you still got your wife right? I’ve been alone for years now. Dating several women along the way, but I was never feeling that connection with any of them. All I ever wanted was a son to carry on my legacy.”

Traffic came to a full stop. Tanabe knew his way around the city and knew a shortcut to basically every destination he has ever been to. All they had to do was wait just a little while longer, just enough for him to reach the next intersection. From there on it should be a smooth ride to Ueno Station.

“Well, I’ve got two kids and let me tell you, having children is highly overrated. They never listen to a word I’m saying. And I’m pretty sure they’re embarrassed about me driving a taxi around the city. I swear I can see the disappointment in their eyes when I get ready for work in the morning. Let me tell you, you dodged a bullet there.”

“You’re providing a service to this city and its people. It’s an important job man, not a lot of people realise that. I’m sure you’ll land on your feet. You just have to pick up the right customer at the right time, and whole your life can change in a minute. Trust me.”

“Still, it breaks my heart every time to see them looking at me like that.”

Soft water droplets started hitting the car as they rode forward. The sky was gradually hanging over with grey clouds. Soon, crime would surface from whatever hiding place they were in. Tanabe’s big dream was racing underground. But today he only saw raindrops race down the windows, while he listened to the rhythmic flick of the wipers.