Right in the middle of his gap year, Brian is pursuing a career as a painter. But just like his life, his career is on a train to nowhere. His troubled youth and the lack of success in his painting had caused him to fall into a depression. His parents give him a trip to Tokyo, a city he has always dreamed of going to, in order to cheer him up. They sent his sister Marissa with him to keep an eye out for him.

In Tokyo, Brian meets a mysterious stranger that claims to have a solution to all his problems. He follows the stranger to Super Potato, a gaming arcade right in the entertainment hub of Tokyo. There he finds himself trapped inside a life-threatening game. From that moment, he is no longer Brian, but a yakuza hitman called Jiro.

Jiro has everything Brian ever dreamed of, a career and a girlfriend. Inadvertently, he becomes involved in a search for identity. All the while a talking cat follows him around.

Once Marissa finds out Brian is missing, she never stops looking for him. She’s teaming up with the one person she least expected to help her.

And as Brian will soon discover, when you try to run away from your problems…they catch up to you. 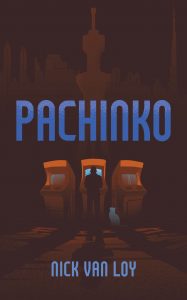