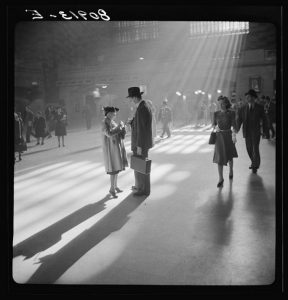 “Don’t go!” she said to him, almost grabbing him by the arm.

“I don’t have any other option dear, I have to go.”

The station was filled with several people, either going to work or to visit relatives in a nearby city. The weekend had started pleasantly until Jim got that one phone call. One phone call that altered his entire way of life. One phone call to end a ten-year-old agreement, all in the blink of an eye. Jim worked at a clothing store, selling designer suits to people just like him, people who liked to dress the part.

“Fucking hell Mary,” he grunted, “what the hell am I supposed to do now?”

Mary was at a total loss of words. Who could tell her husband what to do, certainly not her. She knew he wasn’t going to listen to any of her advice, otherwise we wouldn’t be here, in this god-forsaken train station.

“Those sons of bitches! Nine months, NINE FUCKING MONTHS they want me to stay there. No way Mary, I’m out now!”

“Look at them, just look at them!” he heard people say, passing them on the way to the tracks.

Of course, he didn’t care what other people thought of him, but this time he took it personally and gave them the dirtiest look he could imagine.

“What are you going to do there?” Mary asked for the second time today.

“I dunno, I’ve seen crazier things happen. Really, who the hell do they think they are? Goddamn, I could use a drink!”

“Let’s go back home then, your favourite Texas single malt is there, waiting for you. Just don’t go Jim, please!”

Jim looked at the big clock behind Mary. He still had about twenty minutes to get to the tracks. After the rant he did earlier today, he couldn’t risk missing that train.

“Goodbye Mary!”, Jim said, while readjusting his hat. One last time he adjusted his tie and grabbed his suitcase even tighter. It even surprised him that his entire life could fit into one little brown suitcase. The sun cast two giant shadows on the ground beneath them, at least they looked happy. creating a prison of white light.

“I’ll see you soon honey!” Jim said while he kissed Mary one last time, to reassure her that he wasn’t going to fail.

On his left hand, the weight of his .45 began to weigh on his arms, as if that suitcase carried all the solutions to his problems.